Last week I was fortunate to visit areas of Fukushima Prefecture here in Japan affected by the earthquake-tsunami-nuclear explosion that occurred exactly four years ago. The visit was part of JCC2015 (Japan CSO Coalition for 2015 WCDRR) conference, which concluded the day after the field visit with an important program of sessions.

After visiting Fukushima, I joined a team of ChildFund staff participating in the World Conference on Disaster Risk Reduction (WCDRR), a United Nations event.

The visit to Fukushima was unforgettable. The impact of the horrific events of four years ago is still very apparent, as is the strong and continuing resilience of the local people, even those who remain in “temporary” camps.

A good summary of the events of the events of 2011, along with some lessons we should learn, is contained in the new publication “Ten Lessons from Fukushima.” In brief, a massive (magnitude 9) earthquake at 2:46pm on March 11, 2011, caused extensive damage across northern Japan, and triggered an enormous tsunami. This tsunami struck coastal zones of northern Japan an hour after the earthquake, destroying vast areas and killing many. The Fukushima Dai-Ichi nuclear plant, located on the coast, was severely damaged by the tsunami. The next day at 3:36pm, core meltdown and a massive explosion destroyed reactor unit 1. Other reactors subsequently failed.

It has been estimated that the equivalent of 168 Hiroshima nuclear bomb’s worth of radiation was released when Fukushima Dai-Ichi reactor unit 1 exploded.

Evacuation orders were slow to come, partly due to the loss of communications facilities, but also due to startling management and leadership errors.   Eventually, after suffering serious exposure to radiation, some 300,000 people were evacuated from areas inside a 30km radius around the reactor complex.

This map shows the 30km evacuation zone, and the radiation plume.

Radiation drifted with the wind, falling onto land and people and animals, leaving extremely high levels of iodine, caesium, and other radioactive elements. Radioactivity fell across inhabited, farmed, and forested areas according to the wind direction at the time, and radioactive water was released into the sea – even now, something like 600 tons of radioactive water are released into the ocean each and every day. “Safe” levels of radiation were repeatedly raised.

Investigations have found that the nuclear disaster was preventable; appropriate safety mechanisms – existing at the time – were not incorporated into the Fukushima Dai-Ichi reactors when they were built.

Another good document covering the disaster and its aftermath was created by the Citizens’ Commission on Nuclear Energy.

I had not realised that vast areas of Fukushima Prefecture are still closed due to extremely high radiation levels, and that the Fukushima Dai-Ichi reactor complex is dangerously unstable, and events could spin out of control again at any time. Wreckage litters a vast area, even today, and radiation in many of the places we visited was startlingly higher than what is considered to be safe, if “safe” levels even exist. Radiation contamination seriously impedes recovery efforts, as workers cannot stay in the area for very long. (I was struck by the contrast with Hurricane Katrina where, even with the bungled response, cleanup was far more advanced four years after the storm than what we saw in Fukushima… The difference? The radiation.)

We visited Iitate village, a place where some of the highest levels of radiation were found just after the meltdown – it’s right near the centre of the darkest plume in the map above. We visited Namie town, where we met with local officials who are doing their best to deal with the situation, spending their days in highly-contaminated areas.   We visited tsunami-affected areas of Namie, where we could see vast areas of wreckage, damaged housing, vehicles crushed by the power of the waves. 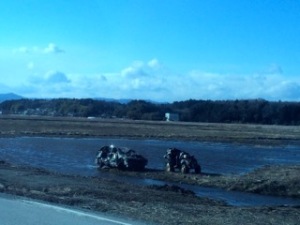 We came to within 4km of the Fukushima Dai-Itchi plant. We finished the day by visiting a group of evacuees from Namie town, currently still in “temporary” housing in Kohri town. Their courage and resilience was powerful and inspiring.

Radiation levels on our bus were high. This reading, taken during our lunch break, is 0.82 micro Sieverts per hour, which is considered “safe” for short-term visits only. 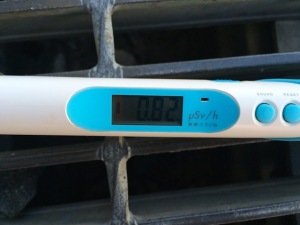 Throughout the area, thousands of one-ton bags of soil, wood, debris, etc., are piling up. Topsoil, down 20cm, from farms is being removed; areas 20m around houses are similarly being cleaned. I was told that these bags, nearly a million of them now, will be taken to gigantic incinerators for processing. Nineteen hugely-expensive incinerators are being built, each with a short lifetime of just two years. The residual ash will be stored, “temporarily”, at the Fukushima plant.

The catastrophe was four years ago. The situation today is described in the “Fukushima Lessons” publication noted above, and in a recent article in The Economist. There are still over 120,000 “nuclear refugees” who cannot return to their communities, their homes, the areas we visited last week. They probably never will, despite financial incentives being offered, because levels of contamination are still so high.

We met with a group of displaced people, from Namie town, now living in Kohri town in “temporary” housing far from their homes, to which they will never return. They live virtually on top of each other, and can hear the softest sounds from their neighbours (such as snoring!) – quite a change from Namie, where their ancestral homes and farms were. 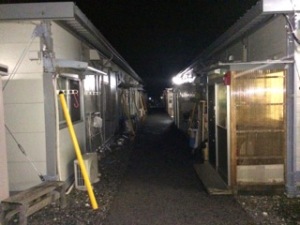 We were lucky to hear a narrative, using a hand-made storyboard, of their experience in the days after the tragedy. It was a powerful and moving description of their suffering; and in the telling of the story, of their resilience and spirit.

Discussing Fukushima is sensitive here in Japan. I found it interesting, at the WCDRR Conference in Sendai, that the many references to the Fukushima disaster refer to it as the “Great East Japan Earthquake” or “Great East Japan Earthquake and Tsunami” disaster. No reference to the horrific and ongoing events at the nuclear power plant, which are somehow not relevant, or too sensitive to mention.

Many have moved on, and assume that recovery has been completed. Nuclear power plants, which were all switched off after the disaster, are being restarted. Public consciousness outside of Japan is probably much lower, or non-existent, though tsunami debris still apparently washes up on beaches in Oregon!

From what we saw here last week, recovery is a distant prospect, likely to take centuries at best.

Ultimately, I took a sense of inspiration from the stories of the people affected, of those who responded and who are responding still, and those who are living lives of advocacy to ensure that the injustices that took place in Fukushima are corrected, and not repeated.

It will take some time fully to comprehend what we saw. But one conclusion is already clear: reflecting on what we saw, those (government, TEPCO, etc.) who are saying that the area has recovered, or is on the road to recovery, are either not seeing what we saw, or are not telling the truth.

4 thoughts on “A harrowing visit to Fukushima”

This site uses Akismet to reduce spam. Learn how your comment data is processed.